So after the mixed reception to the franchise, how did the 4th game Call of Juarez: Gunslinger do?

The game has you playing as Silas Greaves, a fictional wild west bounty hunter who recounts thirty years of his adventures to a small group of people in a bar in Abilene, Kansas. The game has you playing through the stories that Silas recounts to the group. As you play the game, the levels change to fit with the story Silas is telling, even going so far as to make you redo small sections of some levels as Silas attempts to tell “the true story”.

The story is narrated by Silas as you play, with him recounting events with famed western figures such as Billy the Kid, Butch Cassidy, and Jesse James, while every little detail is questioned by the people he is drinking with. Those people being Jack (someone who questions and doubts many aspects of Silas’s story), Steve (a character you barely notice), Molly (a jovial bartender), Dwight (a gullible teenager who is a big fan of Silas and his stories), and Ben (the barman).

While the story is a wild ride the ending was rather predictable for me. With it being apparent mid-way through that something was a little off, with the loading screens giving it away. I did really enjoy the story up until the end and would recommend it even though I feel it is not the main focus of the game.

After finishing the story you can go through it again on New Game+ with the skills from your last play-through.

Graphics are cell shaded which isn’t to everyone’s taste, but in this instance, I think it compliments the feel of the game. It almost looks like a comic book at times and for 2013 the graphics hold up really nicely. I have heard that the game can look worse if you are playing on a 4K display but I played it on a 1080p display and didn’t have any problems. Animations were really nice and smooth, but nothing special. However, in comparison to Techland’s previous games, they were a really good improvement.

However, I did at times struggle to spot enemies from afar as sometimes they would blend into whatever they were covering behind or stood next to. This was quite annoying as I would be wondering where I was being attacked from, and I couldn’t see anyone.

The gameplay is as wild as the tales that Silas spins, with lots of slow-mo action and bullets flying everywhere. This is a very loose arcade-style shooter, it’s rather forgiving in the sense that you don’t need to be an expert shooter to have a good time. I would compare Gunslinger to games such as Doom (2016) and Payday 2 where the game rewards fast-paced and accurate shooting.

The game allows the player to slow down time as they kill enemies. The more enemies you kill the more slow-mo you get. This is really useful for helping to land accurate and quick shots on your enemies, and it makes for a fun time when you score lots of kills at once.

The game also incorporates a dodge death mechanic that allows you to dodge the bullet that otherwise would have killed you which is very useful and cinematic.

Both mechanics are used a lot and make for some really fun and intense moments as you try to shoot down hordes of enemies.

The weapons you get to use are your typical western affair. With three different types of revolver, two types of rifle, and two types of shotguns as well as dynamite (Which doesn’t get used a lot in my experience). Personally, I spent the most time with the rifles and revolvers and didn’t find much use for shotguns. This is mainly because it takes one or two rounds to kill nearly all enemies, therefore having more damage with a range limitation is really underpowering. However, both revolvers and rifles feel really powerful and fast further pushing the fast and aggressive gameplay. While there isn’t the most variety in the weapons department, for a 4 -5 hour experience it seemed just right.

Overall I really love the gameplay. It’s impactful, fast, and encourages an aggressive style of play rather than a cover-to-cover approach. Making you feel like an absolute badass as you gun down hordes of outlaws.

The game rewards you with experience as you kill enemies. With enough experience, you will level up and earn a skill point, which you can put into one of three skill trees (they are shown as revolver cylinders). You can earn more experience as you kill enemies in creative or stylish ways or by being consistent and keeping the combo multiplier high. The skills are fairly basic with a few standouts, such as unlocked enhanced versions of weapons. But for the most part there’s nothing that you wouldn’t expect. I would say that all skills have their use and there isn’t anything that would be a waste of skill points here.

This is my main gripe with the game. While the dueling mechanic isn’t as bad as previous entries, it’s by no means enjoyable or good. The mechanic still feels bloated, and stiff. You need to control your left thumbstick to speed up your draw time, and the right thumbstick to focus your gun. What makes the mechanic somewhat difficult is that you need to manage both mechanics at the same time, with one affecting the other. This makes dueling clunky and the long drawn-out sequence before drawing your gun doesn’t help matters. After drawing your gun cross your fingers as there is pretty big chance the AI will screw you over no matter how well you did in the build-up and gun you down quicker than you can even draw your gun. Duels are very frustrating and a mark against the game.

Boss fights while fine, are a bit underwhelming. They change up the nature of the game by making you use cover and throw dynamite to damage the enemy, which was boring. There are a couple of fights where you need to fight with more strategic aggression where bullets were used more, which I found fairly enjoyable. But outside of those fights I found the bosses lackluster. I wish they put more time into the boss fights to make them more exciting.

The game features three modes: story mode, arcade (which has you go through small segments of each story level to get a high score) and last and least duels (where you duel until you die and set a high score). Story and arcade are worthwhile and great modes, but I would avoid duels for all the reasons above.

Overall I really enjoyed Gunslinger, I think its an overlooked game nowadays and should be played and appreciated a bit more than it is. If you enjoy Red Dead Redemption and Doom you should definitely give this a go. You get a lot of game here for £10, the story will take you about 4–5 hours and arcade mode can keep you busy for another hour or so. So overall I think this game is a good purchase at full price and a robbery if you buy it on sale. 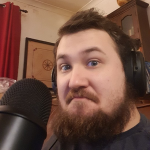 This author does not have any more posts.

26 Feb 21 DaveHodge
From the developer Amanita Design (behind such titles as Machinarium,…
Gaming, News